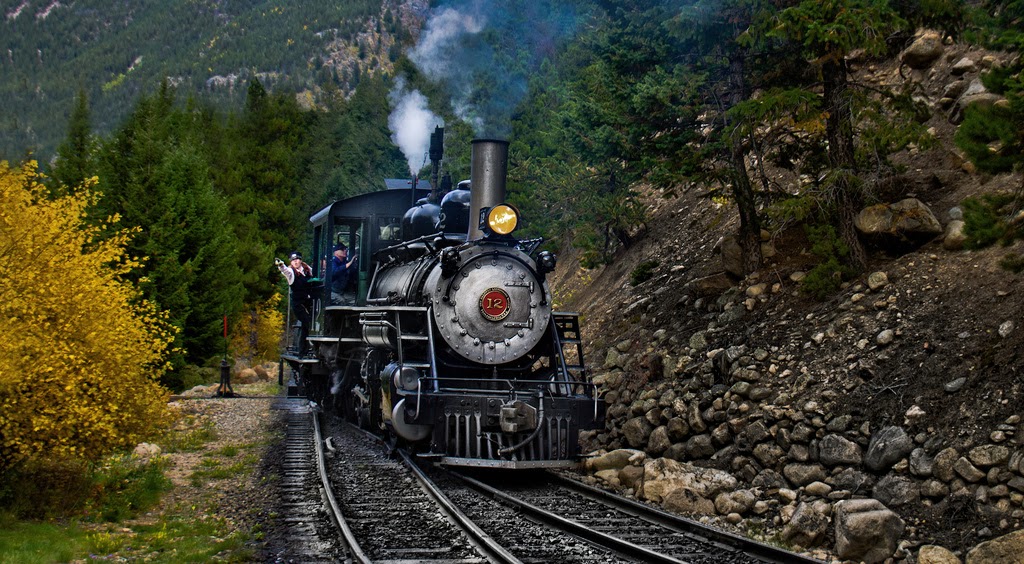 After few days in Aspen, Colorado, we decided to try the Georgetown Railroad loop, historically used for coal transportation, now is more popular for tourism as it slowly chugs over breathtaking landscapes. After an hour long train journey, I decided to take a low angle picture of the iron worm. I moved in front of the engine, very near to the tracks where the passengers are not allowed. This is always the case. The good pictures are made from the places where one is not allowed to go.... ha ha. As I got my picture in frame to shoot, the official screamed from the engine for me to get the heck out of the way!!!
Posted by Thejas Rajaram at 9:04 PM No comments:

After shooting the sunrise shots at Sylvan beach, I saw large number of seagulls land on the beach for sun bathing. They were not there when I arrived earlier at the beach before sunrise, and later I saw them leave as soon as the Sun rises higher up and it becomes warmer. Putting my camera on a tripod, and self timer, I ran towards the birds to make them all fly up together against the Sun, creating silhouettes of birds in flight. Generally, I do not prefer disturbing the wild life or other people for photography, but was technically not wild life and I promised myself not to do this anytime again soon But, the birds were not happy. They started chirping and yapping between themselves in air, and started flying wildly. I have never heard of anyone being attacked by seagulls before, but scenes from the movie 'Birds' began rerunning in my mind. As I wrapped up my gear to head back, one of the birds dropped something on me.
Posted by Thejas Rajaram at 8:54 PM No comments: 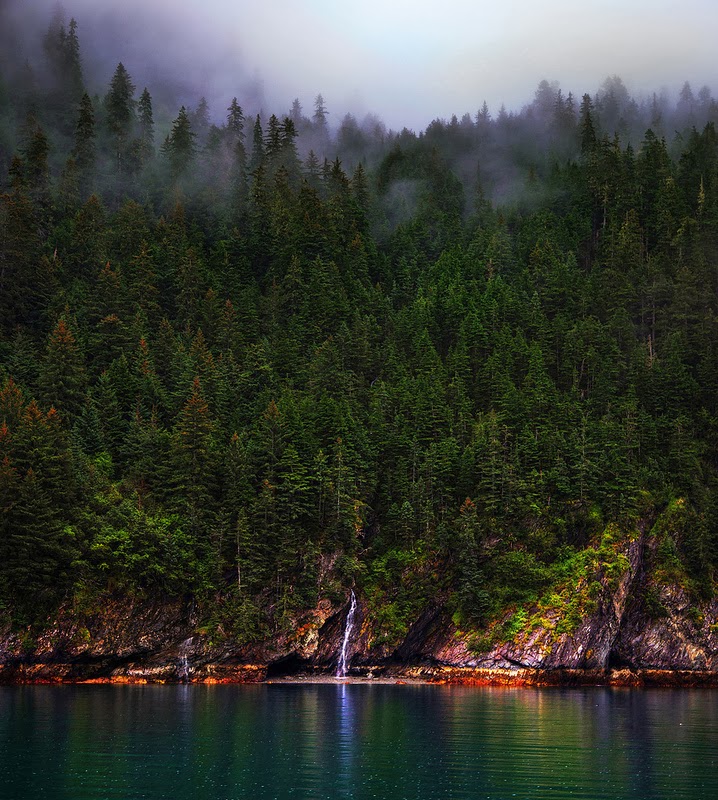 It had rained the previous five days, and it was still mysteriously cloudy when we passed this enchanting fjord on a Kenai Fjords cruise boat, in Alaska. You can see that the clouds are playing hide and seek in between the trees above, and the water captured from them trickling down those trees finally coming together as a waterfall. The only way you can get to see these angelic marvels of nature is if you are on the deck of the boat for most part of your time on the cruise. I was wearing some six layers of clothing, but it was still unbearable at times due to the wind chill and I had to run indoors to catch some heat. In contrast, during the same time of the year, people back home in Houston prefer to stay indoors because of all the heat outside. (PS: Originally, I thought of the title 'Lonely Waterfall' for this picture.....but this waterfall seemed happy and at peace.... hence the change )
Posted by Thejas Rajaram at 4:15 PM No comments:

Rough outside, Calm inside 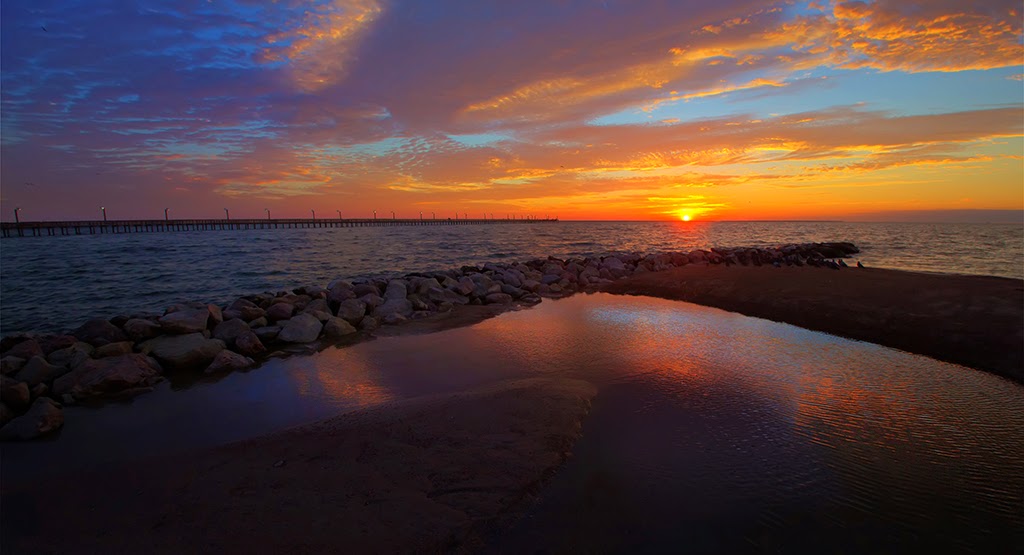 When I reached Sylvan Beach, La Porte just before sunrise, hurriedly taking out my tripod, getting geared up to shoot the rising Sun's drama unfolding before me, I saw an older Chinese woman already well set behind her huge Nikon SLR on a expensive tripod, with a huge neutral density gradient filter (generally preferred by advanced landscape photographers) on her lens, and shooting with a remote trigger. Casually, I walked past her, stealing a glance at her angle of the sunrise shot. Though I did not like her angle, I thought she must have found something there, or maybe her lens was able to see what I was not able to. I installed my gear near this beautiful pond made by the water streaming in from the choppy bay through the short wall of rocks that you see in the picture. It was interesting that the same water was rough outside, but calm inside the wall. I loved the reflection of the blue sky with bits of orange from the Sun thrown in between. The rise of the Sun was heralded by the braids of golden clouds, warming the heart of the cold blue sky. After I completed a couple of shots, I thought of walking on the pier that you see in the picture in search of some portraits of fishermen who come to fish here at dawn. As I started unwinding my gear, I was surprised to find that the Chinese woman had moved just behind me, with her gear set up. "Did you get any good ones?" I asked her curiously. "I moved here too late. Sun was up when I moved, it was too bright. I should have come here sooner," she said with a poker face.
Posted by Thejas Rajaram at 3:54 PM No comments: 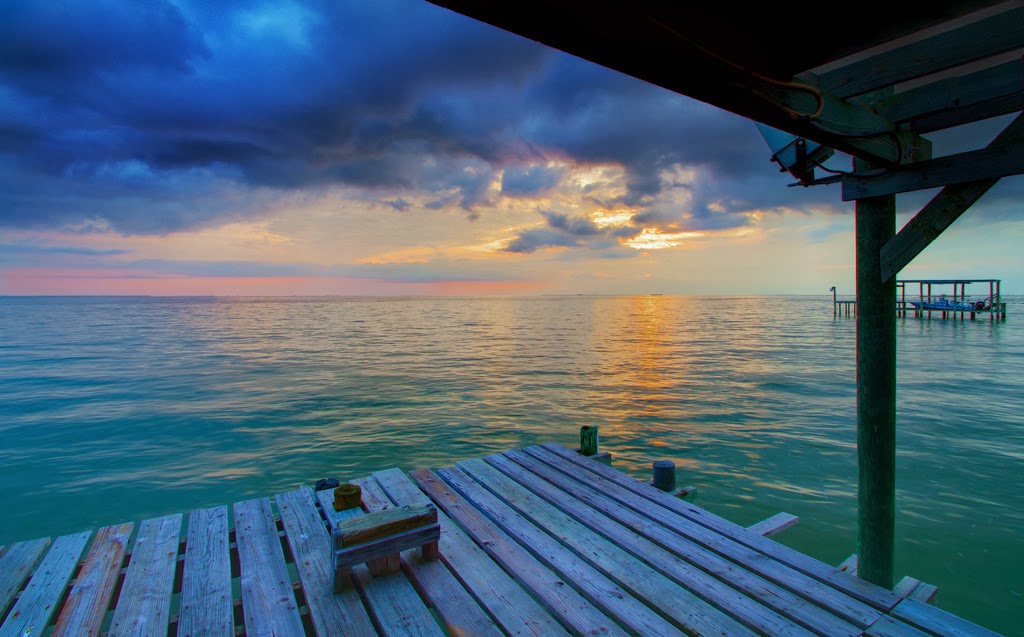 "Don't just take the picture and leave. Wait for a moment. In most cases, the magic happens after you shoot the first picture," I had heard a renowned photographer say. After an hour's drive to League City, Texas for a sunrise shoot, I realized that the clouds had blocked the spot of the sunrise. Frustrated after shooting some mundane piers and reflections on water with no Sun, I was planning on leaving. I saw a couple of guys who had come for fishing at dawn and struck up a conversation with them. One of the guys spoke about his boat on a deck. On the coast of the back waters of League City, they have this beautiful little decks for boats at the back of their houses, almost a full minute walk from their backyards, on creaking planks of wood over water. These look like little islands over the beautiful blue waters. He was explaining to me about why this coast was better than Galveston's. Just then, the Sun peeped out of a small clearing of the clouds to listen to our conversation about decks and boats.....
Posted by Thejas Rajaram at 9:02 AM No comments:

Toklat river in Denali National Park, Alaska deceived us appearing as a small stream the first time we crossed it on a bridge. But it was different when we got close to the river. It gushes with force and made us forget about all plans to cross it on foot. I got down low to shoot this picture, with the sounds of the water trickling over the stones and rocks on the bank close to my ears.
Posted by Thejas Rajaram at 9:01 AM No comments: 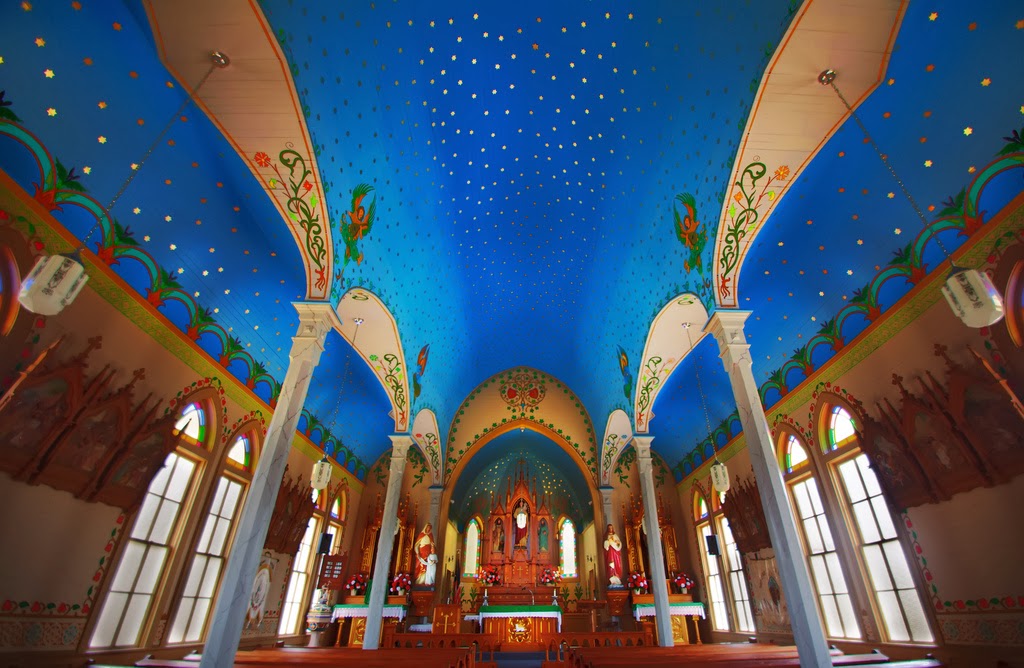 A one hour drive from Houston is Schulenburg, Texas, popularly known for their painted churches. These small churches look very ordinary from outside and you can almost miss them when driving past them. But they have some beautiful designs painted inside. Many of them are more than a hundred years old, built by early Czech settlers in Texas. The one featured here is Dubina church. But do not go there on a hot summer day. There are no ACs inside the churches, and unless you love the aroma of baking wood ( most of the churches are entirely made of wood), you will be in no mood to appreciate the artwork.

Posted by Thejas Rajaram at 8:54 AM No comments:

When we woke up to this 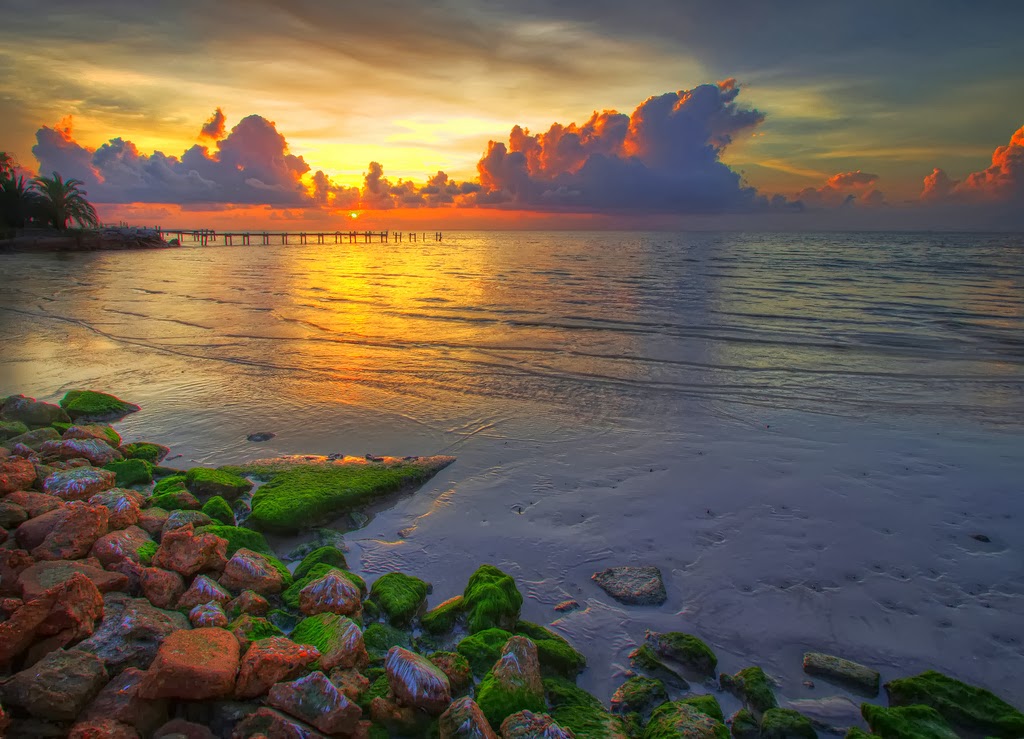 I set up my tripod just as the Sun rose above the horizon. The water you see in the picture started rising quickly, and almost covered the green moss covered heart shaped rock. As it started rising higher up, I decided against getting wet, and ran back onto the shore. I was disappointed not to have been able to take the picture of the Sunrise, having driven an hour to reach this place before Sunrise. "Great morning. Isn't it?" a middle aged, very fit, very rich woman in white Nikes from head to shoes said politely, as she brisk walked away. The Todville road in Seabrook, TX has some lovely expensive homes of rich people, with back yards facing the Galveston bay It was a lovely morning, and there was no point in wasting it thinking about pictures when the nature was painting the skies with beautiful colors. I stood there for sometime admiring the light, when the water receded, and the Sun was in the right position just beneath the clouds.
Posted by Thejas Rajaram at 8:22 AM No comments: 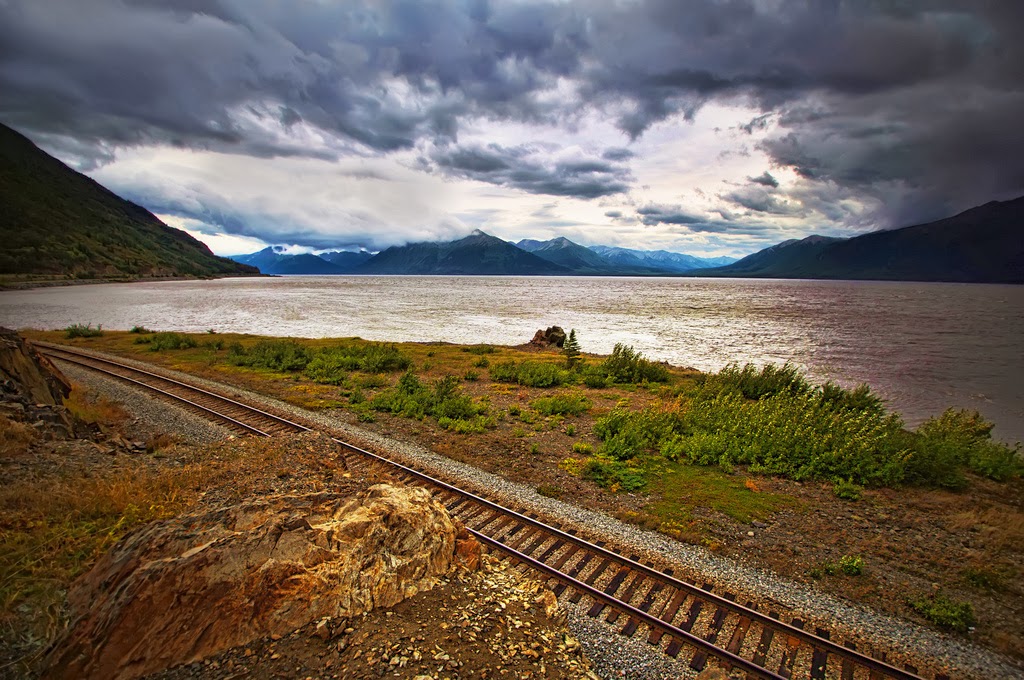 While driving from Anchorage to Seward in Alaska, the highway has a piece of the sea, Gulf of Alaska on your right, the water you see in the picture. In between the highway and the Gulf, a thin strip of land runs parallel, where you can see the Alaskan Railroad rails. In some places, it almost appears as though the rails touch the sea. The train that runs on these rails is supposed to be as pretty as the landscape through which it snakes. On the other side you can see the beautiful hills and fjords of the Kenai peninsula. If you zoom this picture real big, you can even see some glaciers on those blue hills. From Anchorage to Seward, it is supposed to take only a little more than two hours. But, there are hundreds of such view points on the road, where one is tempted to stop. Some guys took eight hours to do the same route, a friend told us.
Posted by Thejas Rajaram at 6:52 AM No comments: